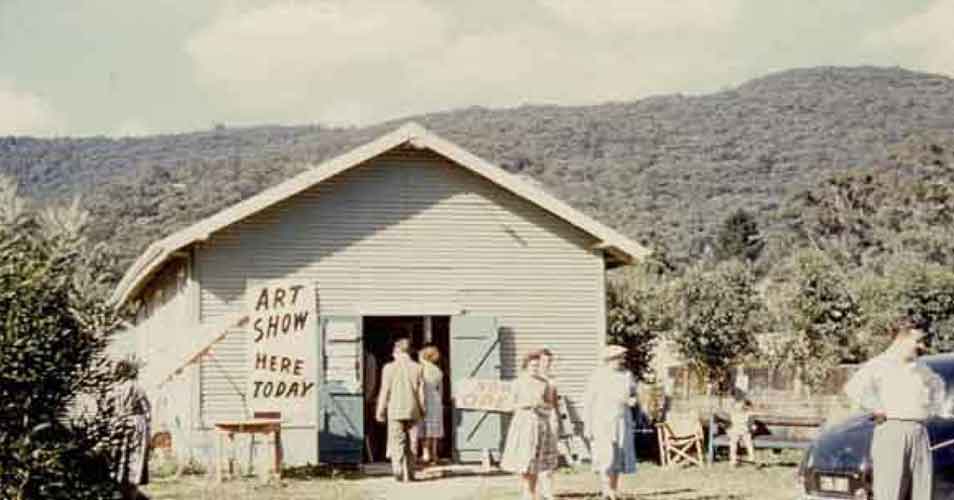 The Ferntree Gully Arts Society had its beginnings in 1944 with a letter sent by local potter, Allan Lowe, to the Secretary of the Ferntree Gully Shire, suggesting that an Art Exhibition be held to “develop the cultural and appreciative level of our residents and (the money raised) donated to the Red Cross to aid fighting men”.

From a successful exhibition, including works on loan by such luminaries of Australian art as Arthur Streeton, Louis Buvelot, Phillips Fox, Tom Roberts, Charles Conder, Julian Ashton, William Ricketts, Merric Boyd and Albert Namatjira as well as works by local lesser known artists, the germ of a society was formed.

An old army hut was purchased in 1947 and moved to the present site - hence the name of our gallery.

Subsequent works and improvements to the building have been ongoing in response to changing community needs, and in 2019 we were proud to open a sculpture garden for the enjoyment of all members and visitors.

Established in 1951, the Tuesday night Sketch Club was a staple on the society’s calendar. Finding somewhere for artists to draw from life for a very reasonable fee was not an easy task in the fifties and many came from “town” on the train to the little Hut in the hills. Over the years artists such as Fred Williams, Noel Counihan, Ray Crooke and Arnold Shore attended the Sketch Club.

The Hut saw the beginnings of many groups, some of which continue to this day.  A music society, a poetry group and a potters group all began in the early years as did the Ferntree Gully Film Society and the 1812 Theatre Co. in Upper Ferntree Gully which began as The Hut Players Repertory Group.

Through our many workshops, social activities, exhibitions and classes we foster a culturally active community.

Going forward, the FTG Arts Society continues to provide a warm and welcoming environment for artists of all abilities and ages.

More information is in our book entitled The Hut: a history of the Ferntree Gully Arts Society and the Hut Collection, 1944-94  by Judith O’Donnell and Robert Diss. which is available for purchase at The Hut.